The Gigabyte Z370N WIFI is a Mini-ITX motherboard for Intel eighth-gen Core i processors. Let's take a good look at this small and powerful motheboard. 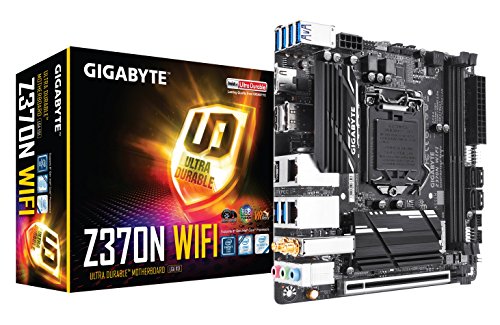 As any Mini-ITX motherboard, the Gigabyte Z370N-WIFI offers only one PCI Express 3.0 x16 slot.

This slot is covered by a stainless steel shield, that work as a shield against interference, and also improving mechanical strength of the slot.

Obviously, the motherboard does not support CrossFire and SLI.

The first M.2 slot has a heatsink, shown in Figure 3.

The second M.2 slot is located at the solder side of the motherboard.

Figure 4: M.2 slot on the solder side

The Gigabyte Z370N-WIFI has two memory sockets. You can install up to 32 GiB with this motherboard if you use two 16 GiB modules.

In order to enable the dual-channel mode, you must install two memory modules.

The Intel Z370 chipset supports 14 USB 2.0 ports and ten USB 3.0 ports. The Gigabyte Z370N-WIFI offers two USB 2.0 ports, available through a header located on the motherboard. There are nine USB 3.0 ports, seven on the rear panel (six Type A and one Type C) and two available through a header. There are no USB 3.1 (gen 2) ports.

The Gigabyte Z370N-WIFI does not support FireWire or Thunderbolt ports.

This motherboard comes with a high-end audio circuit. It uses a Realtek ALC1220 codec, which offers 7.1 audio with a 120 dBA signal-to-noise ratio at the analog outputs and 108 dB for the analog inputs. This is a high-end codec that is great even if you intend to work with analog audio editing.

All the audio section is physically separated from the other circuitry by a line that reduces the interference and helps the audio section to achieve its nominal signal-to-noise ratios. All the capacitors on this circuit are audio models and there is a headphone amplifier. The analog audio outputs are shared and there is no on-board optical SPDIF output.

Besides that, the Z370N WIFI comes with an 802.11ac Intel 8260NGW wireless interface, supporting dual band and Bluetooth 4.2.

The Z370N-WIFI has two BIOS chips and connectors for RGB LED strips.

In Figure 8, you can see the accessories that come with the Gigabyte Z370N-WIFI.

The Gigabyte Z370N-WIFI uses high-end “black” solid capacitors (a.k.a. 10K black capacitors) and all coils on this motherboard are ferrite ones
.

The main specifications for the Gigabyte Z370N-WIFI include:

Even using a small form factor, the Gigabyte Z370N WIFI is similar, in features, to high-end models. Obviously, being a Mini-ITX (which is one of the smaller form factors available) motherboard, it has some limitations like only on PCI Express 3.0 x16 slot, two memory sockets and the lack of space-demanding bells and whistles like POST display and on-board buttons.

However, it brings two Gigabit Ethernet ports, a high-end audio codec, excellent overclocking features, two M.2 slots (one with a heatsink) and, as its name tells, a high-performance wireless networking interface.

All of this shows that the Gigabyte Z370N WIFI is a high-end motherboard, perfect for anyone who loves small form factor computers, but doesn’t give up on performance and features.

Social media scams generate more than 770 million US dollars in losses in the US alone, and it’s … END_OF_DOCUMENT_TOKEN_TO_BE_REPLACED

AMD, together with Intel, is one of the major processor manufacturers known in today's market. … END_OF_DOCUMENT_TOKEN_TO_BE_REPLACED

The Phoenix character in Valorant is one of the most amazing to play. Being aggressive, Phoenix will … END_OF_DOCUMENT_TOKEN_TO_BE_REPLACED