The ASRock Fatal1ty Z370 Professional Gaming i7 is a high-end motherboard for Intel eighth-gen Core i CPUs, offering a 10 Gbps Ethernet port. Check it out! 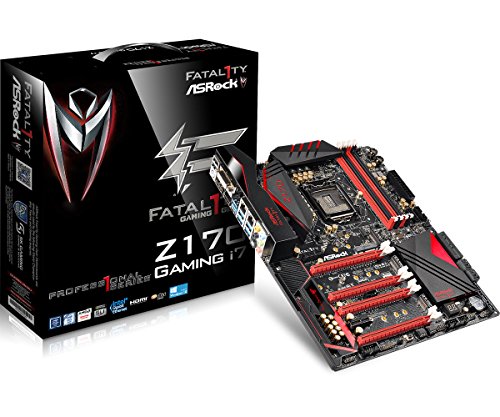 Eighth-gen Intel CPUs are compatible with DDR4 (up to 2,400 or 2,666 MHz, depending on the model) memory. According to ASRock, the Fatal1ty Z370 Professional Gaming i7 supports DDR4 memories up to 4,333 MHz.

The ASRock Fatal1ty Z370 Professional Gaming i7 has four memory sockets. You can install up to 64 GiB with this motherboard if you use four 16 GiB modules.

The Intel Z370 chipset supports 14 USB 2.0 ports and ten USB 3.0 ports. The ASRock Fatal1ty Z370 Professional Gaming i7 offers six USB 2.0 ports, available through three headers located on the motherboard. There are eight USB 3.0 ports, four on the rear panel and four available through two headers. There are also three USB 3.1 ports, two on the rear panel (one Type A and one Type C,) and one available on a through a header, controlled by an ASMedia ASM3142 chip.

The ASRock Fatal1ty Z370 Professional Gaming i7 does not support FireWire or Thunderbolt ports.

Figure 5 shows the audio section of the motherboard, without the plastic cover.

Besides that, one of the highlights of the Z370 Professional Gaming i7 is a 10 Gbps Ethernet port, controlled by an AQUANTIA AQC107 chip. This kid of port is ten times faster than regular Gigabit Ethernet ports.

The Fatal1ty Z370 Professional Gaming i7 a two-digit error code display, two BIOS chips, and reset and power buttons. Besides that, it has RGB LEDs around chipset and in the plastic cover. The color of the lights and even a flashing pattern can be set using an application that comes with the product, or in the board setup.

In Figure 8, you can see the BIOS chips, the POST error code display, and reset and power buttons.

In Figure 9, you can see the accessories that come with the ASRock Fatal1ty Z370 Professional Gaming i7.

The CPU voltage regulator circuit of the ASRock Fatal1ty Z370 Professional Gaming i7 has 14 phases for the CPU. The voltage regulator uses an Intersil ISL69138 controller chip (digital design). Each phase uses one SM7341EHKP integrated circuit.

The ASRock Fatal1ty Z370 Professional Gaming i7 uses high-end Japanese solid capacitors from Nichicon (“12K black capacitors”) and all coils on this motherboard are ferrite ones with 60A spec.

The main specifications for the ASRock Fatal1ty Z370 Professional Gaming i7 include:

The ASRock Fatal1ty Z370 Professional Gaming i7 is one of the highest-end motherboards for eighth-gen Core i CPUs available.

First, because of its excellent quality, denoted on high-end components, like the Nichicon capacitors on the audio section and the voltage regulator, which, by the way, uses a high efficiency design. It also brings lots of features that make it great for overclocking, like clear CMOS, power, and reset buttons, POST error code display, etc.

It also offers a high-end audio circuit, a slot configuration that supports up to five video cards, three M.2 slots, and an excellent number of SATA and USB ports.

But the greatest highlight of the ASRock Fatal1ty Z370 Professional Gaming i7 is its networking configuration: besides two Gigabit Ethernet ports, it also offers a high quality Wi-Fi interface, and even a 10G Ethernet port, which is a high-speed standard recently introduced in the desktop market.

Being that full of features, the ASRock Fatal1ty Z370 Professional Gaming i7 is an excellent choice for computers based on Intel “Coffee Lake” CPUs, for gaming, working, and even for servers.

AMD, together with Intel, is one of the major processor manufacturers known in today's market. … END_OF_DOCUMENT_TOKEN_TO_BE_REPLACED

The Phoenix character in Valorant is one of the most amazing to play. Being aggressive, Phoenix will … END_OF_DOCUMENT_TOKEN_TO_BE_REPLACED