How to understand the RAM classifications? 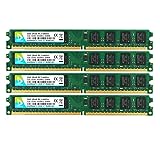 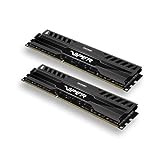 How to calculate the maximum transfer rate for a memory module?

The maximum transfer rate for a memory module can be calculated through the following formula:

How do RAM memories work?

For example, let’s say that you bought a pair of DDR3-2133/PC3-17000 RAMs. Even though they are labeled as DDR3-2133, they won’t run at 2,133 MHz automatically on your system. This is the maximum clock rate they support, not the clock rate at which they will be running.

If you install it on a regular PC system supporting DDR3 RAM memories, they will probably run at 1,333 MHz (DDR3-1333) – which the maximum DDR3 RAM standard speed –, achieving a maximum transfer rate of 10,664 MB/s (or 21,328 MB/s if they are running under dual channel mode, read our tutorial on dual channel to understand more about this subject). So, they won’t automatically run at 2,133 MHz nor automatically achieve the 17,000 MB/s transfer rate.

Why should or shouldn’t you buy these modules?

So, why would someone buy these modules? Someone would buy them for overclocking. Since the manufacturer guarantees that these modules will run up to 2,133 MHz, you know that you can raise the memory bus clock up to 1,066 MHz to achieve a higher performance with your system. However, your motherboard must support this kind of overclocking (read our tutorial on memory overclocking for more details). Thus buying a memory module with a labeled clock rate higher than what your system supports is useless if you are not going to overclock your system.

For the average user, that is everything you need to know about DDR, DDR2, and DDR3 memories. For the advanced user, there is yet another characteristic: the temporization of the memory, a.k.a. timings or latency. Let’s talk about it.

Because of timings, two memory modules with the same theoretical maximum transfer rate can achieve different performance levels. Why is this possible if both are running at the same clock rate?

Timings measure the time the memory chip delays doing something internally. Here is an example. Consider the most famous parameter, which is called CAS Latency (or CL or “access time”) that tells us how many clock cycles the memory module will delay in returning data requested by the CPU.

The operations that these numbers indicate are the following: CL-tRCD-tRP-tRAS-CMD. To understand them, bear in mind that the memory is internally organized as a matrix. This is where the data are stored at the intersection of the lines and columns.

Notice that not all motherboards allow you to change the memory timings. Also, some motherboards may not be able to run at very low timings, and they may configure your memory module to run at a higher timing setting because of this.

How does overclocking work?

When overclocking your memory, you may need to increase the memory timings in order to make the system run in a stable manner. Here is where something very interesting happens. Due to the increased timings, the memory may achieve a lower performance, even though it is now configured to run at a higher clock rate, due to the latency that was introduced.

Now we are going a step further as we will explain in detail each one of the memory timing parameters.

Notice that the clock rate here is the real clock rate under which the memory module is running – i.e., half the rated clock rate. As DDR, DDR2, and DDR3 RAM memories can deliver two data per clock cycle, they are rated with double their real clock rate.

You can even calculate the time the memory delays until it starts delivering data. The period of each clock cycle can be easily calculated through the formula:

SDRAM, DDR, DDR2, and DDR3 RAM memories implement burst mode, where data stored in the next addresses can exit the memory at only one clock cycle. So, while the first data would delay CL clock cycles to exit the memory, the next data would be delivered right after. The prior data that has just come out from the memory, doesn’t have to wait for another CL cycle. Also, DDR, DDR2, and DDR3 memories deliver two data per clock cycle, and that is why they are labeled as having twice their real clock rate.

Each memory chip is organized internally as a matrix. At the intersection of each row and column, we have a small capacitor that is in charge of storing a “0” or a “1” – the data. Inside the memory, the process of accessing the stored data is accomplished by first activating the row and then the column where it is located.

This activation is done by two control signals called RAS (Row Address Strobe) and CAS (Column Address Strobe). The less time there is between these two signals the better, as the data will be read sooner. RAS to CAS Delay or tRCD measures this time. In Figure 5 we illustrate this, showing a memory with tRCD = 3.

As you can see, RAS to CAS Delay is also the number of clock cycles taken between the “Active” command and a “read” or “write” command.

As with CAS Latency, RAS to CAS Delay works with the memory real clock (which is half of the labeled clock). The lower this parameter, the faster the memory will be, as it will start reading or writing data earlier.

As with the other parameters, RAS Precharge works with the memory real clock (which is half of the labeled clock). The lower this parameter, the faster the memory will be, as it will issue the Active command earlier.

Adding everything we’ve seen, the time elapsed between issuing the Precharge command and actually getting the data will be tRP + tRCD + CL.

How fast should RAM be for a gaming PC?

For gaming, we recommend RAM modules that are as fast as possible, for obvious reasons. For starters, video games these days not only take up quite a lot of the RAM but also separate that data. This is why you’ll need your RAM to access everything as quickly as possible for a seamless experience. You should go for dual-channel DDR4 or DDR5 RAM with a frequency of 3,000 MHz or more. Those modules can get quite expensive, but it’s way better than experiencing bottlenecks during intense gameplay sequences.

Do timings matter on RAM?

Overall, we certainly found that if you dig deep enough, you’ll discover that timings definitely matter. It won’t impact every game or application. However, it does make sense to at least consider timings when buying RAM, especially if you can get better timings. With that said, we only recommend buying RAM from trusted brands and from trusted retailers.

2 Reasons why your warranty can be voided.

Even if a RAM module’s warranty lasts a lifetime in theory, in practice that warranty can be easily voided. This could happen from two factors. First, if someone has tampered with the module in the past the warranty will be voided. Second, if there’s too much goo or liquid present on it the same thing will happen.

Is RAM speed limited by CPU?

Actually, it is the combination of CPU and motherboard which limits DIMM speed. DIMM speed will only go as high as the lower of the speed limits between the CPU and motherboard. For example, a CPU may support speed up to 1600 while a motherboard supports speeds up to 2400. However, DIMMs will go up to 1600. In short, your computer is only as fast as its weakest component.

Social media scams generate more than 770 million US dollars in losses in the US alone, and it’s … END_OF_DOCUMENT_TOKEN_TO_BE_REPLACED

AMD, together with Intel, is one of the major processor manufacturers known in today's market. … END_OF_DOCUMENT_TOKEN_TO_BE_REPLACED

The Phoenix character in Valorant is one of the most amazing to play. Being aggressive, Phoenix will … END_OF_DOCUMENT_TOKEN_TO_BE_REPLACED