The ASRock X299 Taichi is a high-end motherboard for Intel LGA2066 HEDT processors. Let's see why. 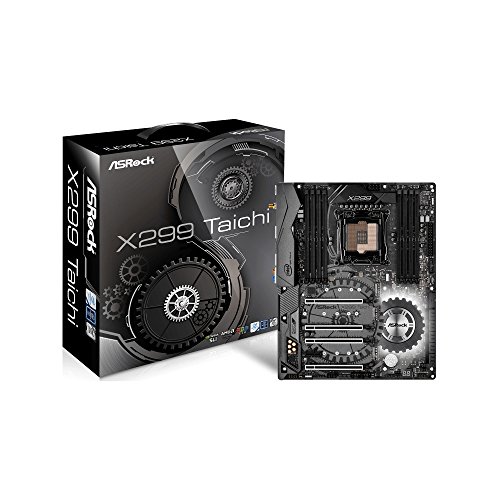 The X299 chipset was released with the new LGA2066 processors, models Skylake-X and Kaby Lake-X. These CPUs are on the HEDT segment, which means they are aimed at high-performance desktop workstations, and not for servers.

The main differences between the X299 and its predecessor, the X99, besides the new CPU socket being supported, are the number of PCI lanes controlled by the chipset (24 on X299, eight on X99), USB 3.0 ports (ten on X299 and six on X99), and SATA-600 ports, reduced from ten on X99 to eight on the X299. The X299 chipset also supports Optane memory, that accelerates SATA drives.

From the compatible CPUs launched so far, the Kaby Lake-X models support only two memory channels, and the other ones support four channels. The number of PCI Express lanes controlled by the CPU also depend on the processor model, being 16, 24, or 44 lanes. All LGA2066 CPUs are unlocked for overclocking.

The motherboard supports CrossFire with up to three and SLI with two video cards, except when a 16-lane CPU is installed.

There are also three M.2 slots. The first and third ones are compatible with SSDs up to 2280 with SATA-600 or PCI Express 3.0 x4 connection, while the second one supports 22110 drives also with SATA or PCI Express interfaces.

The PCI Express x16 slots are covered by stainless steel shields, that shield against interference, and also improve the mechanical strength of each slot.

Intel socket LGA2066 CPUs have an embedded memory controller, meaning that the processor, not the chipset, defines what memory technologies you can have and the maximum amount of memory that is possible. The motherboard, however, may have a limitation as to how much memory can be installed.

One of the highlights of the LGA2066 platform is the support for quad-channel architecture. The ASRock X299 Taichi has eight memory slots. The motherboard supports up to 128 GiB with this motherboard if you use eight 16 GiB modules.

The quad-core CPUs, however, support only two channels. So, if you use one of these CPUs, four memory sockets will be disabled, and you can install up to 64 GiB of RAM.

In order to enable the quad-channel mode, you must install four or eight memory modules (if your CPU supports it.) When installing four memory modules, you must skip one slot between modules.

The Intel X299 chipset is a single-chip solution, which is also known as a PCH (Platform Controller Hub). This chip has eight SATA-600 ports, supporting RAID (0, 1, 10, and 5). The motherboard comes with the eight ports, plus two ports controlled by an ASMedia ASN1061 chip. All of them are installed on the motherboard edge and rotated 90°, so the installation of video cards will not block them. Three of the ports are shared with M.2 slots.

There are also two USB 3.1 Gen2 ports, one Type A, one Type C on the rear panel, controlled by an ASMedia ASM3142 chip.

The ASRock X299 Taichi does not support Thunderbolt or FireWire ports.

This motherboard comes with a high-end audio circuit. It uses a Realtek ALC1220 codec, which offers 7.1 audio with a 120 dBA signal-to-noise ratio at the analog outputs and 108 dBA for the analog inputs. Unfortunately, no more specs for this codec are available. This circuit uses audio-specific capacitors from Nichicon, and a headphone amplifier using the TI NE5532 chip.

The analog audio outputs are independent and use gold-plated connectors. The motherboard also comes with an on-board optical SPDIF output.

There is also an M.2 Intel 3168NGW IEEE802.11ac Wi-Fi adapter with two antennas, which supports Bluetooth 4.2, shown in Figure 6 with its shield open.

The X299 Taichi has two BIOS chips, and support TPM (trusted platform module.) It also offers a two-digit display that informs the error code in case of an unsuccessful boot.

Besides tha
t, it has programmable RGB LEDs around the chipset.

In Figure 9, you can see the accessories that come with the ASRock X299 Taichi.

The CPU voltage regulator circuit of the ASRock X299 Taichi has 12 phases for the CPU. The voltage regulator uses an Intersil ILS69138 controller chip (digital design). Each phase uses one chip with “27B 73AA” marking.

The ASRock X299 Taichi uses high-end “12K Black” solid capacitors from Japanese Nichicon and all coils on this motherboard are ferrite with 65 A capacity.

The main specifications for the ASRock X299 Taichi include:

The ASRock X299 Taichi is a robust motherboard for LGA2066 processors, full of resources and with excellent cost/benefit ratio. Besides the features offered by the chipset (eight SATA-600 ports and eight USB 3.0 ports), that are more than enough for most users, it also brings two more SATA-600 ports and two more USB 3.1 Gen2 ports, being one of them type C.

It has eight memory sockets and four PCI Express 3.0 x16 slots, supporting SLI and CrossFire with up to three video card, which is also more than most users need. As a plus, it brings a POST error code display and a “clear CMOS” button.

Other highlights are the audio section, that uses a high-end codec and some details that improve audio quality, the three M.2 slots, all of them compatible with SATA-600 and PCI Express SSDs, and the Wi-Fi interface. The best part is, however, the high quality voltage regulator circuit.

Being relatively affordable (considering, of course, it is a motherboard aimed on a high-end platform), we can say the ASRock X299 Taichi is an excellent deal if you are looking for a great motherboard to build a high-end computer for both gaming or work.

AMD, together with Intel, is one of the major processor manufacturers known in today's market. … END_OF_DOCUMENT_TOKEN_TO_BE_REPLACED

The Phoenix character in Valorant is one of the most amazing to play. Being aggressive, Phoenix will … END_OF_DOCUMENT_TOKEN_TO_BE_REPLACED