The ASUS PRIME Z370-A is a motherboard for eighth-gen Intel Core i processors with focus on cost/benefit ratio. Check it out!

The first two PCI Express x16 slots work on x16/x0 or x8/x8 configurations, and the third one works always on x4 speed.

The first two PCI Express x16 slots are covered by stainless steel shields, that work as a shield against interference, and also improving mechanical strength of each slot.

One of the M.2 slots come with a heatsink, shown in Figure 3.

The ASUS PRIME Z370-A has four memory sockets. You can install up to 64 GiB with this motherboard if you use four 16 GiB modules.

The motherboard comes with these six ports. All of them are installed on the motherboard edge and rotated 90°, so the installation of video cards will not block them.

The ASUS PRIME Z370-A does not support FireWire or Thunderbolt ports.

This motherboard comes with a high-end audio circuit. It uses a Realtek S1220A codec, which offers 7.1 audio with a 120 dBA signal-to-noise ratio at the analog outputs, 113 dB for the analog inputs, 32 bit resolution and 192 kHz sample rate. It is a high-end codec and there specs are excellent even if you intend to work professionaly with audio editing.

The codec chip is shielded and all the audio section is physically separated from the other circuitry by a line that reduces the interference and helps the audio section to achieve its nominal signal-to-noise ratios. The capacitors on this circuit are audio-specific Japanese models.

The portrayed motherboard has one Gigabit Ethernet port, controlled by an Intel I219V chip.

The PRIME Z370-A has RGB LEDs on the motherboard edge, on the solder side. The color of the lights and even a flashing pattern can be set using an application that comes with the product, or in the board setup.

The motherboard has a set of four LEDs that indicate boot problems.< /p>

In Figure 8, you can see the power button, the MemOK! button (which tests the memory,) and the LED indicators.

In Figure 9, you can see the accessories that come with the ASUS PRIME Z370-A. Notice the metal bracket that can be used to install a 40 mm or 50 mm fan (not included) to cool motherboard components, memory modules os SSDs.

The ASUS PRIME Z370-A uses solid capacitors and all coils on this motherboard are ferrite ones.

The main specifications for the ASUS PRIME Z370-A include:

The ASUS PRIME Z370-A is a nicely balanced motherboard for the user who is building a desktop PC based on an eighth-gen Core i CPU.

It has not many bells and whistles, like extra SATA-600 and USB 3.0 ports beyond the ones offered by the chipset, nor advanced overclocking options, but it supports all the features most of the users will need. It also supports two video cards in SLI (or up to three in CrossFire,) which is not a common configuration nowadays.

The audio secion is a highlight on this motherboard, among with the two USB 3.1 ports.

So, if you are building a computer based on an Intel “Coffee Lake” processor, and looking for a solid motherboard with good cost/benefit ratio, the ASUS PRIME Z370-A is a great option. 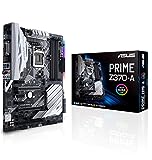 The recent F8, Facebook Developer’s Conference, held in San Jose gave us a lot to chew on. At … END_OF_DOCUMENT_TOKEN_TO_BE_REPLACED

Take a step back, and reminisce about all the troubles we had to face while ordering a simple pizza … END_OF_DOCUMENT_TOKEN_TO_BE_REPLACED